The future of the archive

What do you want to happen to your work and archive?

Power would like to think his work and archive might, some day, be stored together in a major public institution such as the V&A (Victoria and Albert Museum) or NMM (National Media Museum). Whilst hopeful that this might happen, Power is also pragmatic enough to realise this is far from certain. This is a source of some concern for Power as he does not wish his family to be burdened with the responsibility of two lock-ups full of 'stuff' they know has a value, but without being clear about where it might go and who will look after it.

Naturally, like many photographers in a similar position, Power would like his family to benefit from his work financially. He hopes that, well into the future, there will be a 'trickle of money' from the sale of his work that will benefit his children but, again, he is unsure whether this is a vain hope that may never come to fruition.

Whilst Power is not confident there is an institution that would want to take the entire archive, all, he is reasonably confident that there would be collectors who would acquire the best work. This was not something Power had thought about until he joined the Magnum Board and realised this was an issue that some older members were discussing.

Ultimately, if his work was split up and held in different geographical locations and types of institution, that "wouldn't be the end of the world". For example, a project made in Italy might end up in a collection in Italy, whilst work made in Britain might be held in a British institution.

The Magnum Foundation is aiming to establish premises in Paris to house a library and resource, with the intention of creating a strong on-line presence that researchers can use. The resource would include members’ correspondence, emails and other ephemera, material which is currently being collected and scanned before being returned to the photographers. 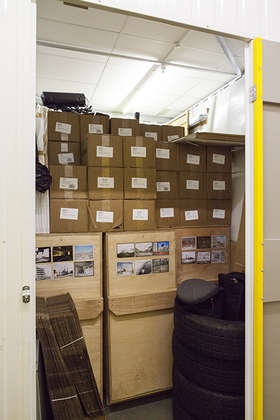