The Streets of London: Downing Street

On 19 June 1970 all changed once again in Downing Street, as a defeated Prime Minister, Harold Wilson, left to be replaced by the new Conservative leader Edward Heath. I went along and joined the crowd of well-wishers and the curious, marshalled by a few policemen, but otherwise it was a surprisingly casual affair.

Harold Wilson must have already left and we stood waiting for Heath to emerge, which he eventually did into a scrum of photographers and television crews, before being driven away beaming, though whether he was off to see the Queen or to go to Parliament I cannot recall.

One roll of film was exposed. It follows the wait outside the door of Number 10, the new Prime Minister emerging, though it’s hard to see him in the melee of press, and his car’s progress down the street past we bystanders, followed by the swift dispersal of the crowd once the event was over.

I like that word, ‘bystander’, and what it perhaps connotes, ‘a person who is present at an event or incident but does not take part’. However, it is not accurate for the situation as, though we were all standing by, we did participate as the necessary witnesses to that moment of history. 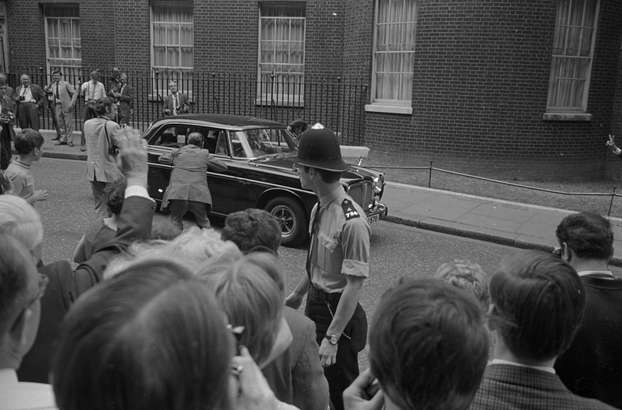