An Extensive Ancestry - part two of The Last House

One day, after a few visits to the Lizard Art Gallery, I was invited to join the proprietor for a cup of tea in her kitchen. It was the room in which she sat and waited for visitors, down a gloomy narrow corridor off the hall, and it was packed with all she needed to pass the days - books, a TV, her paints, paperwork and so forth - as the rest of the ground floor was full of paintings.

In the kitchen was an unusual looking picture hung high up on a wall, so I asked if I could take a picture of the room featuring the painting. I set up the MPP and using a wide lens took in as much as I could of the room. Having exposed a negative I took out the small sketchbook I used to record information about a photograph taken, and asked who the painting was by.

“It’s one of mine!” was the reply.
She was delighted that I found her painting of interest.
When I asked her name, as the painting was high up and the signature illegible, she said
“ My name is Miss Woodd, and its spelt W, double O, double D. Miss Woodd ”.

I expressed my surprise at the spelling and she then added that it was an old spelling and that her family traced her ancestry way back. She was clearly about to reveal a truly ancient lineage but I was taken aback when she firmly stated that it had been followed unbroken to King Lud, who died in 53 BC. Not only that but she had proof and, diving behind a chair, she pulled an enormous hand-bound leather volume.

Measuring at least 24 inches wide, 18 inches high and over 3 inches deep, it had been compiled apparently by a family member, a Victorian clergyman, one I thought with far too much time on his hands. Sure enough, through page after page of neatly inked notation, the history was traced back through the centuries to the mythic figure of Lud, who had apparently founded London and done much else. And it appeared that Miss Woodd believed very word. 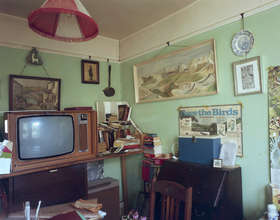