Full information on Meadows' projects and publications can be found on his website. Projects include:

The Greame Street Studio: Meadows rented a shop in Manchester’s Moss Side from February 1972 for eight weeks. Open on Saturdays, local people were invited to have their portrait taken and new images were displayed in the window. Everyone who was photographed was offered a free print.

Butlin’s by the Sea: in the summer of 1972 Meadows and Martin Parr were employed as ‘walkies’ at Butlin’s Holiday Camp in Filey, where they took portraits of Butlin’s campers and persuaded them to buy prints. They also made individual, personal documentary series.

June Street, Salford: the result of a working partnership between Meadows and Martin Parr, 1973, they aimed to record the ‘friendly atmosphere’ of the area before redevelopment changed Salford forever.

The Free Photographic Omnibus: For 14 months from September 1973, Meadows travelled around England, visiting twenty towns and cities, with the idea of making a photographic survey of the English. Meadows bought the Leyland double-decker bus for £360; the seats were removed to make space for a darkroom and living quarters and the windows were used as the gallery.

Nattering in Paradise: a photo-documentary by Meadows of life in 1980s suburbia (Bromley near London, though not named). 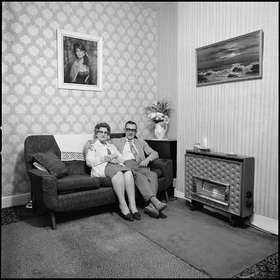 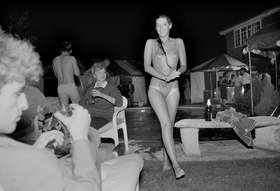