Susan Bosence was a texile artist who used a woodblock printing process and predominantly worked with indigo dyes. She initially came to Devon to work at Dartington College in the 1930s and until the early 1990s lived and worked in a small village to the south of Dartmoor.

In 1991 Plymouth Arts Centre organised a retrospective exhibtiion of her work which drew on the fabrics, printing blocks and working ephemera she had collected in her studio. One key element of the exhibition was her sample books which contained offcuts from a lifetime's work, experimentation and achievement.

To contextualise these objects, I was asked to produce a series of pictures of her studio and spent a fascinating day with her and her husband 'Bo'. A group of the colour prints of the house, the barn studio and the farm courtyard were included in the show which subsequently toured to Bath. At the end of the exhibition, the Plymouth Arts Centre curator drove a hire van to Bath to collect all the works. On the way back, while crossing the Somerset Levels, he was involved in an accident, the van left the road, overturned and burst into flames. The curator managed to escape but all the work in the van was reduced to ashes.

These few photographs suddenly became a precious resource as the only visual record of much of a lifetime's work enabling the Arts Centre, friends and clients to begin the process of reassembling the sample books. 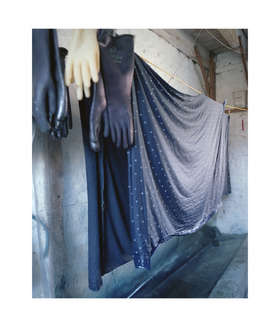 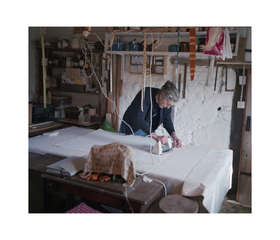